No. 6 Purdue Basketball Wins Thriller Over No. 18 North Carolina 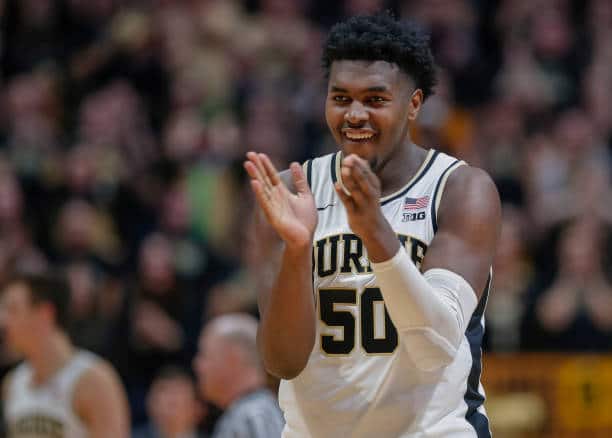 Purdue basketball capped off an impressive offensive performance with a 93-84 win over North Carolina.

Both teams showcased great shot-making especially down the stretch of this close matchup. The fans at Mohegan Sun let the players hear it as both teams traded big shot after big shot in this exciting shootout. Purdue basketball held the lead for most of this game, but Dawson Garcia and North Carolina kept it close for a long time. It wasn’t until the last few minutes that North Carolina couldn’t keep up with the Purdue offense and let their lead grow to 13 points with less than a minute to go.

Hubert Davis has created a true offensive threat in his first season as the Tar Heels’ Head Coach. Any doubts coming into this Top 25 matchup whether or not North Carolina could hang with the nation’s best should be put to bed. Transfer Dawson Garcia had his best performance of the season with 26 points and 8 rebounds as the Tar Heels offense kept them in this game until a late push by Purdue sealed their fate. Defensively this team struggled to slow down the red-hot Boilermakers and will look to see if they can improve on that end of the floor tomorrow as they take on the Tennessee Volunteers in the Hall of Fame Tip-off consolation game.

Even more than North Carolina, Purdue basketball’s biggest strength is its ability to score at every level. Trevion Williams led the way down low as he put up an impressive 20 points & 4 rebounds in just 13 minutes of action. From the outside, Sasha Stefanovic came flying around screens and made some incredible off-balanced threes as he put up 23 points with 8 assists for the game. Matt Painter spoke in his post-game press conference about how despite the incredible strengths Purdue basketball has offensively, their poor defensive play so far may limit their success down the stretch. The Boilermakers have a chance to change that narrative tomorrow as they take on the Villanova Wildcats in the Hall of Fame Tip-off championship game.

The real star of the show today was Jaden Ivey who had 22 points, 10 rebounds, and 6 assists. There were times in this game where all you could do was watch Ivey as he made big play after big play. Whether it’s finding the open guy in the corner for the transition three, finishing a tough layup in traffic, or making a big three, Jaden Ivey can do it all on the offensive end for ‘Boiler ball’. The crowd’s cheering seemed to fuel him as he thrives under the spotlight of big moments in close games. It will be interesting to see how Jaden Ivey leaves his mark on tomorrow’s contest against a Villanova defense that only allowed 15 first-half points today.