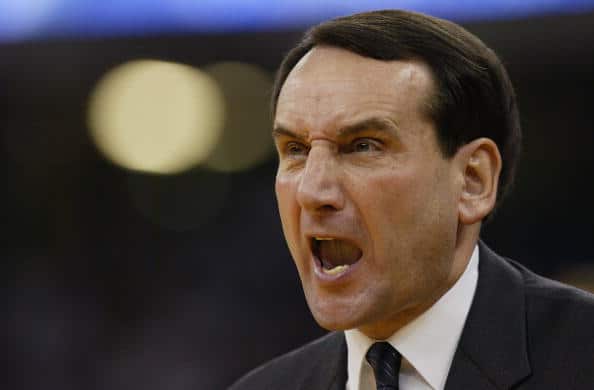 Duke basketball has had some memorable wins, but also its fair share of painful losses.

Duke Basketball has had a plethora of great wins. When you win five national titles and have 16 Final Four appearances, the amount of thrilling wins are numerous. You can read about those here – Top 10 Wins of Coach K Duke Era

Like every program in the country, there are some humbling and disappointing losses.

If you love Duke basketball, you will want to read the other articles here on CBB Review. If you fall into the category where the three best days of the calendar year are your birthday, Christmas, and when Duke loses in the NCAA Tournament, then enjoy this trip down memory lane.

Zion Williamson and RJ Barrett didn’t get to play in the Final Four after falling to Cassius Winston and the Spartans. Heck, Duke was lucky to survive UCF in the round of 32 and Virginia Tech in the Sweet 16. Barrett missed the first of two free throws trailing by two with 5 seconds left.

The fact Duke basketball needed overtime to try and beat SFA was shocking. The fact Duke had the ball and turned it over was more stunning. That led to a Nathan Bain breakaway layup at the buzzer to quiet a shocked Cameron crowd.

Duke was 27-1 against teams seeded 11th or lower until Eric Maynor led VCU to the upset win. It was Duke’s fourth straight loss to end the season.

Duke led 78-67 with three minutes left. 180 seconds to a national title. They never scored again. The Huskies went on a 12-0 run to end the game led by Emeka Okofor. UConn would go on to beat Georgia Tech for the title. Duke let a sixth title slip away with this loss as the Blue Devils had won two of the three meetings with Georgia Tech.

Mercer started five seniors but were playing their first NCAA Tournament game since 1985. That didn’t matter as the Bears shot 56% from the field in their upset win.

Duke led by 18 with under 10 minutes left but was out of timeouts. Kentucky’s depth, full-court pressure, and three-point shooting led a miraculous comeback and extracted a small amount of revenge for their 1992 matchup in the same round. Scott Padgett and Cameron (how ironic) Mills made huge baskets for the Wildcats, who went on to win the title over Stanford 10 days later.

The second-seeded Blue Devils were stunned by the 15th-seeded Patriot League champions behind a 30-point performance from current Portland Trailblazer C.J. McCollum.

Trajan Langdon had the ball in his hands and a chance to be a hero in a game they trailed for the final 14 minutes, but had cut the lead to one point. Duke had won 31 straight games. However, UConn’s Ricky Moore put his defensive stamp on this game and the Huskies claimed its second Final Four win over Duke in a five-year period. This one brought a national title home to Storrs.

UNLV made runs and lots of them with Anderson Hunt, Larry Johnson, and Stacey Augmon, while the only runs Duke had was from Bobby Hurley, who spent a good part of the game running to and from the Duke locker room. UNLV set the record for most points in a title game and largest margin of victory. Duke did get its revenge 12 months later, but UNLV ruled the court in this game on their way to winning the title.