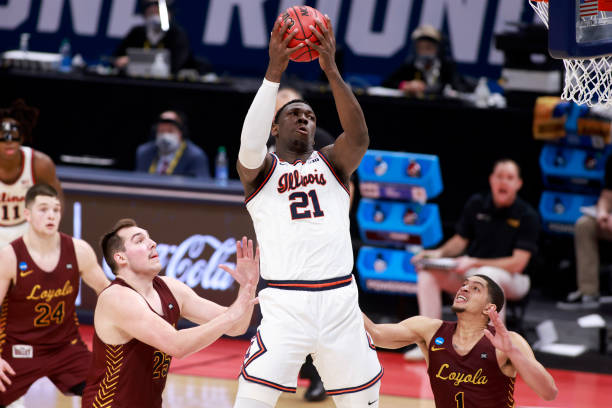 Illinois basketball will look to its star down low in Kofi Cockburn to try and make it back to the Final Four for the first time in nearly two decades.

After a sad sight to see for Illinois basketball fans last year when they lost in the second round to Loyola-Chicago, they hope to see more success from a deeper roster this year. This team is dominant in all parts of the game and Brad Underwood is building up a reputation as one of the best coaches in the Big Ten.

However, Illinois loses one of their best players of all time in Ayo Dosumu who put up video game averages during his college career. One of the best players in all of college basketball leaving your program would hurt any team. Illinois also lost Giorgi Bezhanishvili, a key bench player, who should be able to be replaced.

Cockburn is returning and looks to be an All-American on his way to prove himself as an NBA draft prospect. He has started all but three games for the Fighting Illini in the past two seasons and averaged 17.7 points and 9.5 rebounds last year.

Cockburn’s co-partner Ayo Dosumu is gone after the two led Illinois hoops to a Big Ten Tournament title. The junior now looks to be playing for a Nasmith Award while also trying to lead Illinois basketball to another conference chip and a further run in March. He’s got plenty of help around him, but there’s no secret that Cockburn is the guy.

After an impressive freshman year, Cuberlo looks to take the next step and take off as he did in the three games Dosumu was out.

If Cuberlo can take that next step he has sky-high potential. Cuberlo will need to improve and develop all aspects of his game but mainly his court vision seeing as his 2.6 turnovers would spread throughout games, sometimes having multiple in the first couple minutes of play.

Cuberlo will lead the fast break and the offense and will be the number two option instead of a sixth man. The youngster needs to take part of the load left behind and the former 4-star recruit looks to be ready according to many analysts but we need to see how he plays once the season starts.

Illinois basketball’s depth is incredible, having three freshmen who aren’t expected to get meaningful minutes and will be lucky to earn big roles during the conference slate.

Underwood hit the portal hard grabbing Plummer and Payne, a former star at Utah and a former 5-star from Florida respectively. Both players will be key in relief for the Illini’s star players.

Hawkins is a raw sophomore that could easily take over the four if he proves he can be the athletic stretch he was in high school.  Overall the bench could go 12 deep, but Underwood will likely settle on a nine to ten-man rotation,

Plummer shot 38.3% last season and can shoot from the logo. Frazier shot 36.2% and when he got hot nobody could stop him. Grandison even shot 41.5% from deep on the limited shots he took outside the arc.

Overall, we could see a much-improved shooting team, which will allow Cockburn to kick it out to players that can and will pull up from three. Illinois basketball isn’t just a one-dimensional team with a monster in Cockburn. They’re a legitimate threat from downtown.

Illinois basketball has been steadily improving and with a much deeper team, the Fighting Illini have National Championship potential. They still will need to get through a tough Big Ten schedule and after last year’s early exit, it proves nothing is a guarantee in March.

Coach Underwood knows what he will get from all of his guys. The combination of defensive grit and the exciting offense also makes Illinois one of the most well-rounded teams in the country. Cockburn will be the heart and soul of this team and if he plays excellent like expected, the Fighting Illini are on the shortlist of teams that can go all the way.