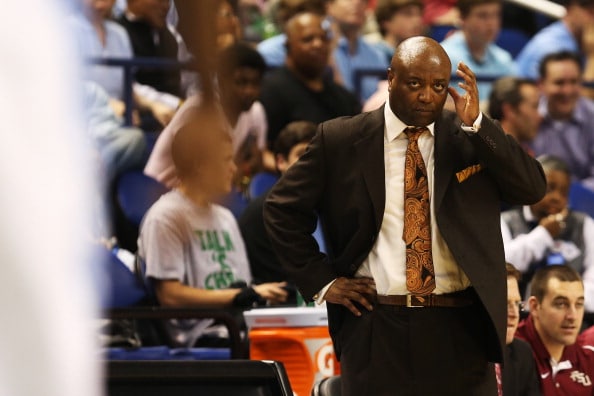 Leonard Hamilton is 73 years old and as wise and sage as they come. Florida State basketball will need to lean on his lengthy resume of success for the 2021-2022 season. There is talent. Just unproven talent that will be replacing four of FSU’s top five scorers from last year’s Sweet 16 squad that lost to Michigan.

M.J. Walker, RaiQuan Gray, Balsa Koprivica and Scottie Barnes (three of whom were selected in the NBA Draft) have all left Tallahassee and took with them over 56% of Florida State’s scoring from last year. The Seminoles reached the ACC Tournament Final and ultimately also lost 70% of its assists, 55.1% of its rebounds, 60.4% of its steals and 59% of its blocks. That’s a LOT of production to replace.

Anthony Polite on what it means to be @FSUHoops and love defense. Here @accmbb media day: pic.twitter.com/pwk1NgjjZm

Polite averaged 10.4 points and 4.5 rebounds last year. Hamilton expects those numbers to increase this season. Last year, FSU shot 37.65%, 22nd best in the country, from behind the arc, with Polite leading the way. His value is greater than that as he is the unquestioned leader of the team. The redshirt-senior will guide the offense, lead the Seminoles’ fast break, and calm the team down when needed. He’s that much of a leader.

If Polite is the grizzly veteran, then Matthew Cleveland is the baby-faced rookie, except his game will resemble anything but a first-year player. The highest-ranked Class of 2021 recruit in the Seminole class, Hamilton is expected to throw Cleveland right into the deep end of the pool.

A two-time high school all-American, Cleveland enters FSU on the heels of a 22.8 point, 10.6 rebound, 2.6 assist, and 2.0 steal senior season. He was recently named to the 20-player watch list for the 2022 Julius Erving Award by the Naismith Basketball Hall of Fame, which is presented to the best small forward in college basketball.

Cleveland can score at all three levels. A great athlete, he has incredible body control and is a slasher who can absorb contact and score in traffic. Can he be a Scottie Barnes type performer? That remains to be seen but Cleveland is a key to the Florida State basketball postseason plans.

Florida State basketball’s depth is a question mark heading into the season. Hamilton has a reputation for developing talent and he will need to do that. What the Seminoles get from the likes of Ballard, Butler, Fletcher, Warley and Wilkes will have a huge impact on their standing come March.

Overall, the bench could be a lot worse, but it’s just the unknown to start out. By the time the season kicks into gear, it will be just fine.

“Florida State is here to stay.”

The only team in the ACC to make it to the last three Sweet 16s: @FSUHoops 🔥 @FSUCoachHam pic.twitter.com/FbiABqwwgs

Leonard Hamilton has built an almost laughable standard of height within the Florida State basketball community. He’s consistently recruited 7-footers, with seven playing for the ‘Noles over the past five seasons.

This season, Hamilton adds two more to the mix in Butler and 7-foot-4 Naheem McLeod. Brace yourself before driving in the lane on these giants.

It’s hard to imagine anyone who lost more from last year’s team than Florida State basketball. But Hamilton will still start three redshirt-seniors, brought in a talented freshman class, and sprinkled in transfers from major programs.

How it all meshes together remains to be seen. Hamilton will certainly find out before ACC play starts test as his team will face off against state-rivals Florida and UCF, while also playing Purdue, Missouri, South Carolina, and always tough Penn from the Ivy League in a demanding non-conference slate.

Hamilton knows what he will get from Polite but one man alone won’t guide FSU to another NCAA berth. Houston transfer Caleb Mills along with Kentucky transfer Cam’ron Fletcher as well as the freshmen will need to contribute quality minutes for this team to be an upper-echelon ACC contender. The coaches sure thik that will happen as FSU was slated second in the preseason coaches poll, behind only Duke.