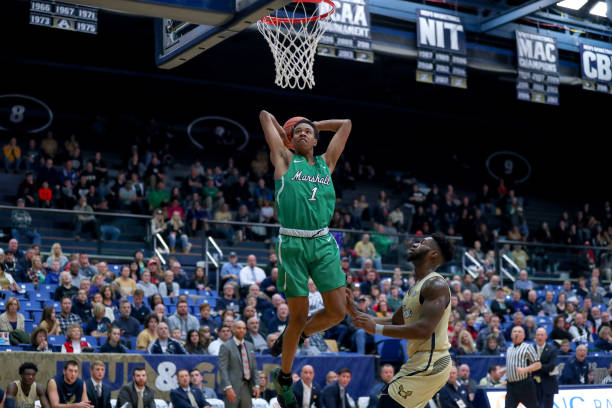 Marshall basketball brings back a unique guard and an experienced roster. They look to use that to win the C-USA and earn an automatic bid down the road.

Kinsey looks to earn his third All-CUSA honor this season and should be a favorite to win C-USA Player of the Year. Kinsey is a dynamic scorer who will use his athleticism and size to blow by defenders. His craftiness in the lane allows him to create shots for open teammates. And with a sniper of a shot from downtown, there’s no great way to slow Kinsey down for an entire game. There’s a lot of Tyrese Haliburton in his game.

Look, Andrew Taylor will need to come in and take over the point guard spot from Jarrod West. But Taylor’s already proven his ability, with some great and consistent performances off the bench last season. The real issue for Marshall basketball lies in the frontcourt. There’s not one great option as a scorer or a post player on this team. They’ve got enough to compete, but someone will need to step up and serve as the third man to Kinsey and Taylor.

Anochili-Killen has the biggest upside, given he’ll just be a sophomore and had a pretty solid freshman year. Miladinovic doesn’t put forth the biggest resume and George is what he is at this point in his collegiate career. Anochili-Killen has room to grow and defensively also showed some promise last season. I’m projecting light improvements, but don’t be surprised if he reaches double figures in scoring.

Marshall is going to struggle off the bench. After Mikel Beyers – who don’t get me wrong, is a great option at sixth man – there’s a whole lot of bleh. It isn’t to say the Thundering Herd can’t find another piece to the puzzle. Rather, there’s just no one to pinpoint during the pre-season.

Beyers has what it takes to be a starter this season, but has been a great bench player in the past and isn’t as strong on the boards as some of the other forwards on the team. A lot of Marshall basketball’s bench success is going to rely on David Early. If he can take that big sophomore leap forward, Marshall will be just fine.

Marshall basketball will go as far as Taevion Kinsey takes them. He’s one of the ten best mid-major players in my book and is also NBA-ready. He has some pieces around him, but it will really test his overall leadership and ability to make players around him better.

Andrew Taylor is flying way too far under the radar. His bench numbers looked like what a good starter might put up, so going into that role this season should be no problem.

Marshall doesn’t lack size, but they do lack a really good frontcourt player. Someone from the three to the five must step up to really complete this team.

Some of the teams ranked behind Marshall may have had better benches or more complete starting lineups, but Taevion Kinsey is that good of a player, the Thundering Herd have to be taken seriously.

Projected Finish: 3rd in the C-USA