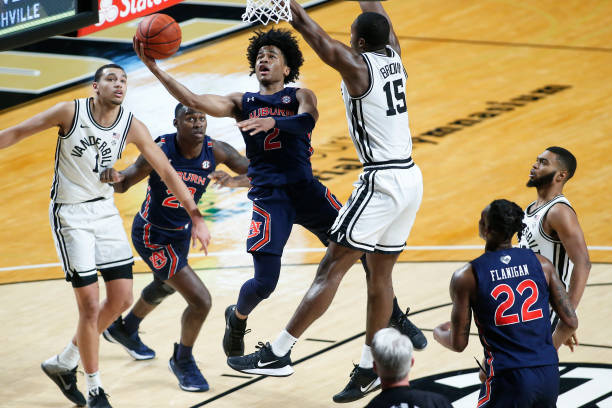 The 2021 NBA Draft is highlighted by the best players from the power conferences. From the ACC to the SEC, here’s how they stack up.

The 2021 NBA Draft is this Thursday at 8 PM ET. This year’s draft is led by Oklahoma State’s Cade Cunningham, USC’s Evan Mobley, and the G-League’s Jalen Green. The talent is undisputable as all three of those players have bright outlooks to make plenty of All-Star teams, All-NBA teams, and fight for NBA Championships down the road.

This year’s draft seems to have a bigger emphasis on the traditional power conferences rather than international players and the new G-League route. In Ariel Puterman’s latest 2021 NBA Draft Big Board, 58 of the 70 ranked prospects played last season in college basketball. Most of them were in the Power 6 conferences.

The Detroit Pistons are officially on the clock but picks 2-60 matter just as much. Here’s a look at how the ACC, Big 12, Big East, Big Ten, Pac-12 and SEC stack up against each other in the 2021 NBA Draft.

This isn’t your typical ACC output for an NBA Draft. Duke has just one projected first-rounder in Jalen Johnson, and there are many doubts that he’ll even be a lottery pick. Scottie Barnes is the best get from the conference and could be a top-five pick, but besides him and Johnson, the rest of the players from the ACC are pure guesses.

Day’Ron Sharpe has drawn some more attention as of late, so he could be a guy to keep an eye on next season. Trey Murphy III has also shot up draft boards, with the potential of being a top 20 pick.

It’s not that the ACC doesn’t have talented players in the 2021 NBA Draft. However, in 2020 the ACC saw three picks in the first 15 selections, and in 2019 it dominated with six of the first 11 draftees, and 10 in the first round entirely. 2021 will be more about how the late first-rounders and second-round picks pan out.

There’s not much you can’t like from the Big 12 this draft. Oklahoma State’s Cade Cunningham is virtually the clear choice at number one. Whether or not the Detroit Pistons decide to trade the pick is up to them.

It’s not just Cunningham that makes this draft so deep for the Big 12. Baylor’s Davion Mitchell should be a lottery pick, even if it means to the Golden State Warriors at 14. His teammate Jared Butler is also on track to be a first-rounder.

The talent doesn’t exactly fall off later in the draft either. Aside from numerous other potential first-round picks, likely second-round picks Jericho Sims and Marcus Garrett show a lot of promise, especially from the defensive side. Sure, the conference won’t get anything crazy like three of the first ten picks, but it’ll hardly miss a beat from the lens of the 2021 NBA Draft as a whole.

Since realignment switched around in 2014, the Big East hasn’t been the same in terms of NBA Draft output. In fact, in those seven years, the conference has had no more than three first-rounders taken in a single draft. The majority of the first-rounders since the new Big East have been from Villanova.

This year, James Bouknight looks to be a lottery pick and Jeremiah Robinson-Earl should be taken in the mid to late first round. A late-season injury has shown no cause for concern on Bouknight, as he’s even gone up on most draft boards. When healthy, he’s possibly one of the three best pure scorers in this draft class. However, after him and JRE, the prospective talents diminish to Sandro Mamukelashvili and David Duke. If either of them does get drafted, it would be in the final picks of the draft.

It’s not to say the Big East doesn’t have talent. It’s just usually a conference where players stay a few years, so the younger talent that’s eyed in the NBA Draft isn’t always there.

It’s easy to get caught up in the fact that the Big Ten only has one potential lottery pick in Franz Wagner. He has the potential of becoming the next good ball-handling forward and at only 19 years old has room to grow all over the place. Wagner will most likely be drafted at the tail end of the lottery, so as far as certain All-Star caliber players, the Big Ten is lacking in the 2021 NBA Draft.

Ayo Dosunmu is one of the most interesting players in the draft. He has all the skillsets that liken him to a future starter, but for some reason hasn’t been projected as more than a late first-rounder.

The Big Ten makes up for its first-round flaws in the second round. There is a solid handful of Big Ten players that could be drafted late. Luka Garza and Isaiah Livers are both candidates for good second-round picks that show the potential of staying in the league for a long time.

Whenever you boast an almost sure top-three pick, you’re going to get a good draft grade. Evan Mobley is that guy and looks to be the highest-drafted center. Chris Duarte and Ziarie Williams are also two sure-fire first-rounders, so the Pac-12 has a legitimate chance at three players selected in the first 20 picks.

Aside from those three, Josh Christopher also has first-round capability and makes it four players that will surely get drafted somewhere.

Aside from McKinley Wright IV, there aren’t many other Pac-12 guys who might be taken in the second round. However, given the talent of Mobley, Duarte and Williams, the Pac-12 is in good hands this draft.

The SEC might not have a top-five guy, but from picks 6 to 60 the conference is in for a big night. As mentioned above, there are ten guys that have serious first-round potential. Although it’d be something crazy for all ten to actually go in the first, no one would be surprised if at least six or seven are drafted in the first 30 picks.

Moses Moody is the ringleader of SEC players looking to be drafted on Thursday. Along with him are Keon Johnson and Isaiah Jackson as other likely lottery picks. Cooper and Thomas are close enough you mise well throw them in the discussion of players picked early on.

In the second round, the SEC doesn’t tail off. Guys like Herb Jones, John Petty and Yves Pons are all a phone call away from hearing their name called late Thursday night. Good job SEC, you earned the best mark of the night.