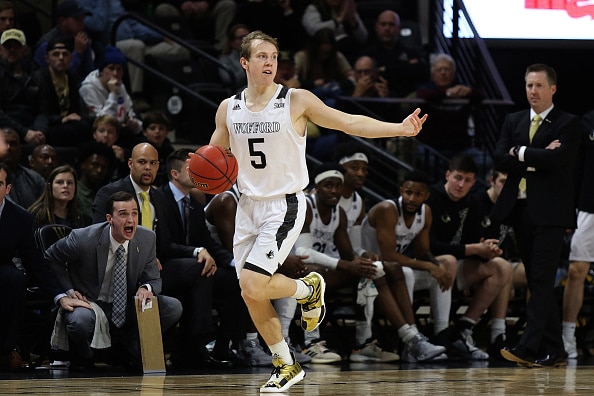 Competing in the Southern Conference these days is not easy. But Wofford basketball has taken it in stride.

The league’s profile has risen significantly as the teams at the top of the league topple power conference foes with more frequency over the last few seasons. The Wofford Terriers have been one of the programs responsible for that. Wofford basketball has knocked off a ranked North Carolina twice in the last three years, as well as earning wins over South Carolina and Georgia Tech on the road. The Terriers elevated the league, even more when they earned a seven seed and knocked off Seton Hall in the first round of the 2019 NCAA Tournament.

One constant through all that success has been rising senior Storm Murphy. Murphy has started 95 of his 102 career games at the school and been a key part of the program’s rise. He can be a deadly three-point shooter, but the most important aspect of his game is being able to facilitate the team’s offense. Murphy got to learn from one of the best guards in Southern Conference history in Fletcher Magee, as well as Nathan Hoover, a fantastic shooter in his own right. With Magee graduating two years ago and Hoover after this past season, this team now belongs to Murphy completely. Head Coach Jay McAuley will look to him to be a leader as Wofford basketball looks to exceed the expectations that have been placed upon them for 2020-21.

With all of that success, it might be hard to believe that the Terriers find themselves under the radar for the upcoming season. However, with high roster turnover after a seventh-place finish in 2019-20, Wofford is not in the discussion among the league’s potential elite programs for the 2020-21 season. The Terriers were picked to finish fifth in the preseason polls conducted by the media and the coaches. That doesn’t seem to phase Murphy and his teammates though.

“It’s a motivator,” Murphy said. “In my first three years, I don’t think we’ve been predicted above the middle of the pack. I love it. To us, it’s not just a ranking or an opinion, but a reminder of the belief and work required to prove people wrong. That’s a fun thing to do.”

Murphy certainly knows a thing or two about overcoming odds himself. He is generously listed as a six-footer on the team’s roster. However, regardless of being undersized throughout his time as a basketball player, Murphy has proven his game isn’t limited by his height. He has figured out his strengths and uses them to make plays for himself and his teammates. He has also kept tremendous faith in himself and fed off the faith the coaching staff has in him.

“I’ve always been undersized, but for as long as that’s been true, I’ve believed in myself,” Murphy stated. “I’ve had to find ways to get my shot off quicker, create separation, and move without the ball to get open looks. With my ball-handling and quickness, I can put a good amount of pressure on my defender and the rim, allowing myself to mix up my threats as a scorer. But it’s not just what I’ve done. My teammates help create a lot of shots for each other and my coaches instill a lot of confidence in me.”

Murphy’s numbers speak for themselves, as he is a career 42.6 percent three-point shooter while also averaging 3.6 assists per game. Defenders have to respect the way he can dive into the lane and either score or pass, leaving opportunities for him to pull up and bury a deep ball.

Storm Murphy’s leadership role with Wofford basketball this season is something he has had plenty of time to craft. However, it is something that could be argued he has already been doing. Murphy started 28 of the 34 games he played in as a freshman in 2017-18. The Terriers were in need of a new point guard with the graduation of Eric Garcia, who had been the program’s point man for their 2014 and 2015 NCAA Tournament teams. He had no problem stepping up, while also being able to learn from and compete with guys like Fletcher Magee and Nathan Hoover in practice.

“Getting to play with some all-timers like Fletch and Nate was unreal,” Murphy said. “I learned a lot from their work ethics, their attention to detail, and their love for the game. Competing with those guys in every shooting competition and drill really pushed me to advance my own game and grew my confidence.”

Murphy and teammate Nathan Hoover took on more responsibility as scorers last season, and that responsibility will be even higher for Murphy with Hoover’s graduation. However, with all of his experience, he has embraced that while expanding his leadership role.

“It’s been important for me to act and play like the senior who has started 95 games in his career,” Murphy stated. “The younger guys will listen and follow the guys who work hard day in and day out. I’ve focused on building relationships with them and giving them the knowledge I wish I had as an incoming freshman. They’ve been great so far, asking questions and working hard.”

Wofford basketball has seven newcomers this season, with six freshmen and one transfer, B.J. Mack from South Florida. Murphy is just one of two seniors along with Tray Hollowell, who should join him in the starting backcourt. There will be a heavy reliance on those new guys to contribute immediately, especially in the paint. Furthermore, guys that had smaller roles last season, like Messiah Jones, will be expected to take the next step in their game. However, Murphy believes last season’s run in the conference tournament can be a sparkplug for this year’s team.

“That was big for our confidence coming into this year,” said Murphy. “We had a number of guys on this team who actually led the way in that tournament run. That’s what I’m most excited about. The fact that we have guys here who have one goal in mind and not only know what it takes to achieve it, but are willing to work for it, is incredibly important this year. We know Southern Conference Tournament runs like no one else.”

To add onto all the typical challenges that face coming together with a lot of new faces, there is the ongoing pandemic as well. Adapting to the new normal on and off the court has been an added responsibility for everyone involved in the program.

“Having to wear a mask, monitor myself at all times, and keep my distance has been quite a challenge,” Murphy said. “We have a few classes online, which makes things easier from a safety standpoint, but having in person classes helps keep normalcy up, something I think we all need right now. Practices are normal for the most part. I think we’ve all gotten used to wearing a mask while practicing. We won’t let masks keep us from communicating on the court.”

All of those challenges haven’t dampened what Murphy believes this team is capable of.

“If we get better every day, we’ll achieve what we want to, which is a Southern Conference Championship,” Murphy stated. “That’s the goal. We know it’s the hardest thing to achieve, but it’s also the most rewarding thing once you get it. We have quite a few guys who are familiar with the feeling. Each practice and game leads to Monday night in Asheville, and we have every intention on being there again.”

It’s said that smaller dogs tend to have a bigger bite, and that’s exactly what Murphy and Wofford are expecting to bring to the table as they begin their quest for the program’s sixth NCAA Tournament berth in 12 seasons.