A New Look for the American: Cincinnati Basketball 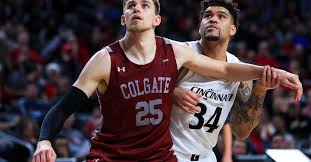 After a weekend filled with sports and the celebration of our military, I wanted to take a look at the next team in the American Athletic Conference. Last year, the University of Cincinnati men’s basketball had a strong team. The team had its offensive struggles. Lead by an often injured Jarron Cumberland, the team took on ranked Ohio State for its home opener. This game was an offensive struggle, however, a strong defense kept the bearcats in it. The Ohio State team came out on top. The team had a surprising loss to a solid Bowling Green team in overtime. With a team that has guards able to defend the 3 point line, the team was able to make shots to seal a win in its next game. The following game was not any better as the team struggled against Xavier in another tough loss. In this part of the season included another tough loss to Colgate. This is where the team’s new transfer player Rapolas Ivanauskas, put up 21 points, had 9 rebounds and shot 10-17, and went 1 for 5 from 3. The team went on to go 13-5 in the conference and 20-10 for the season. With Houston and a surprisingly good Tulsa team, The Cincinnati men’s basketball team was in a 3 way tie for first.

This Cincinnati basketball team is not one plagued by transfers. However, a lot of talent was lost due to graduation. This team was more mature team having 4 graduates. This list includes Trevon Scott, Chris McNeal, Jarron and Jaevin Cumberland. Three of those graduates were leaders and starters last year. Trevon Scott’s growth was a spectacle in his final year and makes his graduating a bittersweet departure. In Scott’s senior year, he was named AAC defensive player of the year, most improved player, and first team all AAC. The team also had 1 player leave the team in Jaume Sorolla. Then two players decide to transfer. These players included Prince Toyambi, who had a medical redshirt, and transferred to Georgia Southern. The other player was Trevor Moore who transferred to Morgan State.

The ability of John Brannen, head coach of the Cincinnati men’s basketball team, to recruit and coach has led the team to three consecutive regular season titles. With his leadership the team is hopeful, however, are nervous they could lose two players in Keith Williams and Chris Vogt. These two players have declared for the NBA Draft, but have a chance to withdrawal as neither has signed with an agent. Both players are very talented, but are not players whose stats jump off the page. Losing a majority of the starting minutes from the Cumberland Cousins and potentially Williams, the team has adjusted focusing primarily on recruiting guards. Chris Vogt announced his return to Cincinnati nearing the end of July.

As I eluded to before, the first player Cincinnati men’s basketball landed from the transfer portal was Rapolas Ivanauskas. In 2019, he was AP Honorable Mention All-American and Patriot League Player of the Year. This big man will make this team very good. Having those two big men playing inside could cause some serious issues for the players going into the paint. He is immediately eligible to play because he is a graduate transfer. The ability to potentially play Ivanauskas and Vogt makes this team very big and very talented.

David DeJulius was the next player to join the team, however, he will likely have to sit out a year unless he can get an NCAA waiver. DeJulius is coming from Michigan which is the cause for his forced sit out. He was an ESPN Top 100 prospect in high school, but did not get a lot of minutes at the University of Michigan in his first season. DeJulius stats in his last year as a Wolverine, he came off the bench averaged almost 21 minutes scoring 7 points per game. He shot 41.7% from the field and 36.1% from 3. DeJulius is a good all around scorer, but also has great court vision. He will fit in with the Cincinnati Bearcats as he is a hard worker.

Looking at the incoming freshmen, Tari Eason is a 6’8″ 4 star forward. This is great landing spot, especially if the bearcats can give him some time to develop. The starting forward will likely be Mamoudou Diarra. The battle for the backup could be interesting as Eason could have a shot at beating out Jeremiah Davenport, who had limited minutes in his first year.

The incoming freshmen guards include Gabe and Mason Madsen and Mike Saunders. After watching highlights for Gabe, he is built to be a shooting guard. He is able to create his shot, but did not see him distributing the ball a lot. It would have been great for Gabe to get a chance to learn from Jarron Cumberland. With time and maturity, Gabe could become a player similar to Jarron. Gabe’s potential to be a leader could cause him to be a terror around the league as the guy who takes the last shot or creates for the last shot. I can see him really struggling early in his career if he gets cornered. I think Brannen can teach him how to play defense and be ball hungry.

Mike Saunders is a pure point guard. He has a lot of talent that allows him to see the court. His ability to find and create open shots for teammates is impressive skill. Again, he is raw and will need help to learn better footwork. Watching Saunders film, he often allows guys to get past him and struggles to be a defensive menace. Another point against him is his size. Saunders stands at 5’11” will likely struggle against the bigger guards that he will be seeing in the American.

Mason Madsen is more of a combo guard and could be a helpful piece for the Cincinnati men’s basketball team. In high school, he really complimented his brother. He was able to see the floor and while he does not have the scoring ability of his brother, he does have talent. Being on this team, he could definitely learn from a Mika Adams-Woods, DeJulius and Williams, if he returns. His size is solid at 6’3″ giving him the edge over Saunders, if he develops and wants to focus on learning the point. It will be interesting to see how Coach Brannen develops these young players. Coach Brannen has a lot of work to do, but also knows what he needs to work on. This team could be barreling towards its fourth consecutive regular season title.