The X and Dru Show 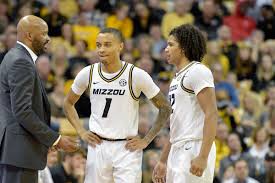 Crafty, elusive, and clutch are three adjectives to describe the Missouri Tigers backcourt.

Dru Smith and Xavier Pinson are going to have to carry a lot of load next year for the Tigers, if they want to be successful. They did this year, and expectations are much higher for next year.

Smith, who will be a senior next year is a very solid guard player. He is exceptional at putting his nose down and getting to the rack leading to a layup or free throws. It helped that he was an 89.9% free throw shooter last season. He is a workhorse who appeared in 31 games, and started in all of them. In addition, he can stick it from mid-range, and if need be hit a three. Not to mention, he is a very solid passer, he will make the extra pass to produce a better shot for the team. On the defensive side, he racked up 64 steals, averaging about 2-plus per game. The 6’3 Senior will be a huge role player for Mizzou throughout the season next year.

His other backcourt partner Xavier Pinson, is the more flashy of the two, while producing at a very high level.

They call him “X”, because coach Cuonzo Martin likes to call him the “X factor.” At having a great end to his Sophomore, he does deserve to be called that. Averaging just under 12 points per game, Pinson accounted for loads of the Mizzou offense. He is an incredibly underrated passer, who loves to throw dimes to teammates from all across the court. He also shows no mercy to opponents, because his dribbling is a tier above everyone else. He really does love to ‘snatch ankles’. Also, he shows no mercy to his rims because it feels he slams it down as hard as Zion Williamson.

These two are going to be fun to watch next season, and if I were you I would: Tune into Missouri games just for them because something special is coming next season.

The two players talk with their coach on the hardware. That’s going to be quite frequent next year.