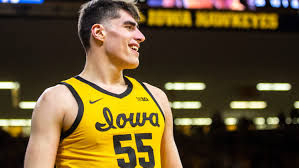 What a statement win for the Hawkeyes at home to solidify the truth behind the Big-Ten home-court advantage. They squeeze by Illinois with a score of 72-65 with a great performance from the big man none other than Luka Garza. Garza had a solid double-double with 25 points and 10 rebounds with a great 3 point shooting performance (4-9 from three). The two other double digit scorers for the Hawkeyes was CJ Frederick and Joe Wieskamp who both had 18 points. On the other side, for the Fighting Illini, their 65 point performance was led by Andres Feliz off the bench with 17 points along with Ayo Dosunmu with 11 points and Trent Frazier with 12 points.

The game started very closely for both of these teams and neither one took a sizeable lead until 5 minutes left of the first half where Illinois was up by 8, however, this lead quickly shrunk and fell apart by the end of the first half. In the second half, the game was very close until Iowa began to pull away with a signature Luka Garza 3-pointer dagger that crushed the hopes of the Fighting Illini. The Hawkeyes improve to 16-6 (7-4 Conference Record) and the Fighting Illini fall to 16-6 (8-3 Conference Record).

Looking forward, Iowa plays Purdue next and Illinois plays a strong Maryland team at Illinois. These two teams are playing at a very high level now and should look to be a 4 or 5 seed with the performances that they are displaying now.