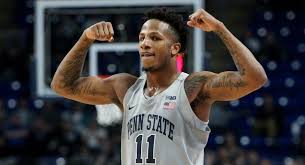 What a statement win from the Nittany Lions.

Before falling to Ole Miss and #3 Ohio State, Penn State was considered becoming ranked as a Top 25 team. This powerful win against #4 ranked Maryland most certainly boosts their resume for this position.

The game started very well for Penn State as they jumped out to a 22-11 start against the Terrapins. Everything seemed to be clicking and the tough shots were falling in. Penn State did a great job in containing potential Player of the Year prospect Anthony Cowan Jr. to only 5 points in the first half. Penn State found their success early on with key steals and driving plays and incorporating Lamar Stevens as much as they could in the post game. The half ended with an incredible buzzer beater shot by Myreon Jones with 0.6 seconds left on the clock.

To begin the second half, Maryland found their stroke and cut away at the solid 10 point lead that Penn State was holding for the majority of the game. This came with Anthony Cowan Jr. hitting some highly contested shots and eventually the lead was cut down to three. Maryland’s hopes were immediately shut down with a run from Penn State that included an almost top 5 dunk of the year from Lamar Stevens which turned out to be a foul. Maryland desperately tried to climb back, but their shots were not falling as they had been in previous games. Penn State improves to 1-1 in conference play and 8-2 overall whereas Maryland falls to 1-1 in conference play and 10-1 overall.