As we get ready for what will be a very exciting 2018-2019 college basketball season, here are some of the potential breakout players in the Big Ten.

With star guard Corey Sanders declaring for the NBA draft after three seasons, it will now be Geo Baker time. During his freshman season, Baker averaged 10.8 points while starting 29 of 33 games. Baker also finished his freshman campaign dropping 25 points against Purdue in the Big Ten Tournament Quarterfinals. Baker has a very similar game to Sanders, both guards can score at will and have a step back jumper that very few can defend. Steve Pikiell‘s team has taken steps in the right direction, and Baker will be ready to lead the Scarlet Knights in 2018-19. 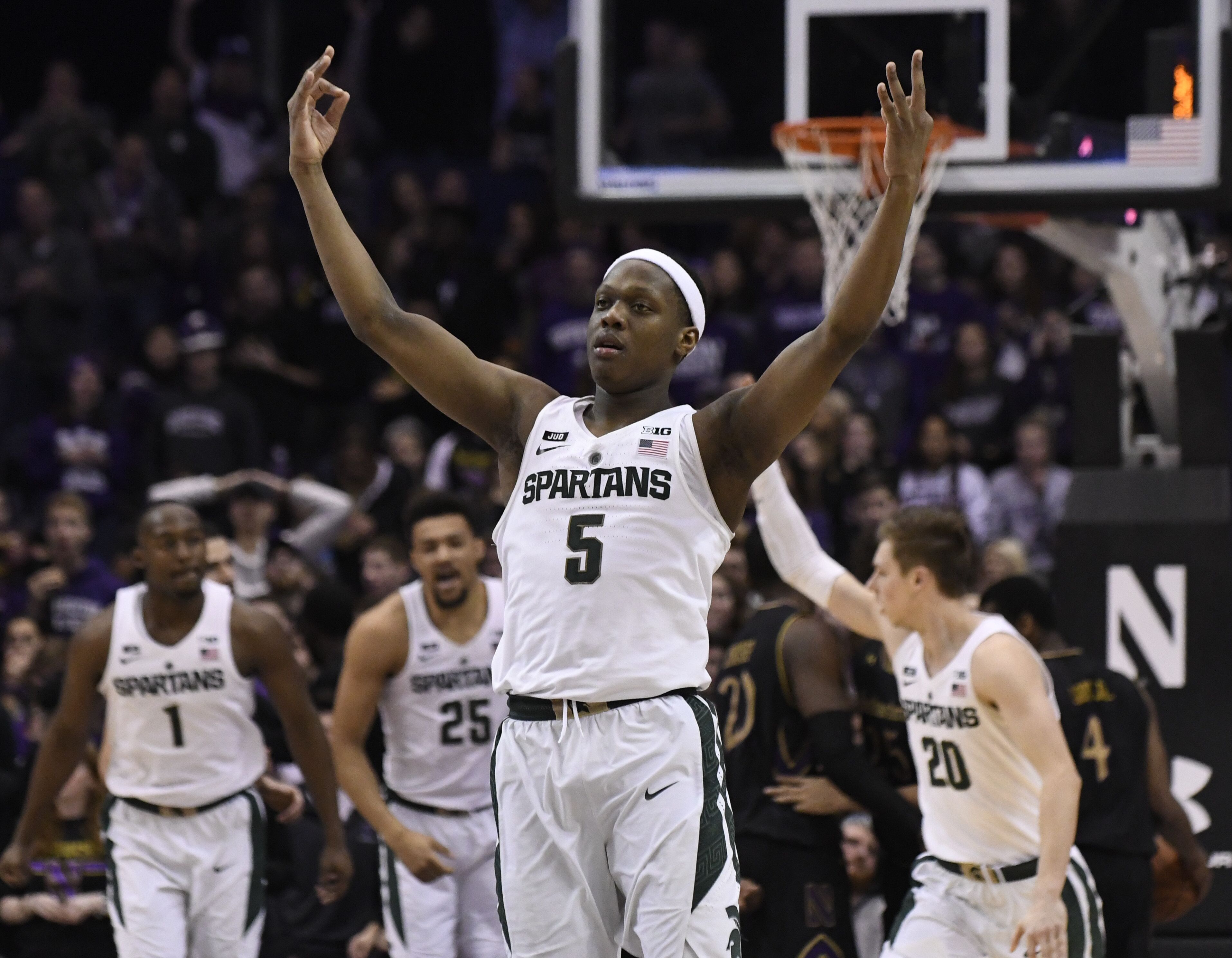 Cassius Winston is one of the most established point guards in the Big Ten, if not the most established following the departure of Northwestern’s Bryant McIntosh. Winston’s “breakout” season may feel a bit different considering he has always played very smart basketball, but hasn’t been forced to be the guy. The narrative with Tom Izzo’s team this season is that Winston will now be looked to as the guy. Talent has been around Winston since he stepped foot in East Lansing, but with Miles Bridges and Jaren Jackson off to the NBA, it is truly time for Winston to show what he’s got.

Going into his freshman season, Trent Frazier was not seen as Illinois’s point guard of the future, that man was Mark Smith. Fast forward to August of 2018, and Frazier will be leading the point for the Illini while Mark Smith will have to sit out for a year before playing in the SEC with the Missouri Tigers. Frazier began to make a name for himself at the start of Big Ten play, and will continue to generate buzz for the Illini.

Following the departures of Isaac Haas, Dakota Mathias, P.J. Thompson and Vincent Edwards, Purdue is in reload mode in 2018. Although Purdue will lose its’ winningest senior class in school history, never doubt Matt Painter. The new man in the middle for the Boilermakers will be 7 foot 3 sophomore Matt Haarms. Haarms got a lot of playing time and advice from being behind Isaac Haas for a season, and will now look to lead the Boilermakers back to the tourney for a 5th straight season.

Although A.J. Turner did not play for the Wildcats in 2017-18 due to the NCAA’s transfer rule, look for Turner to be a big piece in Chris Collins‘s plans for 2018-2019. In his sophomore season at Boston College, Turner appeared in all 32 games while averaging 8.4 points per game. Turner also led the ACC in assist to turnover ratio, something Chris Collins will really need following the departure of Bryant McIntosh.

Brad Davison is the definition of a grinder. During his freshman season for Greg Gard’s Badgers, Davison showed he has the potential to be the next great Wisconsin guard. Davison also played the majority of the season with a very bad left shoulder. When fully healthy, expect Davison and Ethan Happ to try and take the Badgers back to the NCAA tournament after losing their 19 consecutive appearance streak in 2017.

Kaleb Wesson has the makings of an All-Big Ten center. During his freshman season, Wesson averaged 10.2 points per game and shot 56% from the field. In the Buckeye’s first game during their Spain trip, Wesson dropped 20. Give Chris Holtmann another season with Wesson and watch out.

Every time I watch a Nebraska basketball game I tell myself how good Isaiah Roby could be if he really wanted to assert himself and take over the Big Ten. Roby’s athletic 6-8 frame is one that not many can guard in the Big Ten, and Tim Miles will look to utilize Roby a ton alongside James Palmer and Isaac Copeland. Roby will finally average double figures, and will look to lead the Huskers back to the tournament in 2019.

Isaiah Washington, known to many as jelly fam, had a pretty solid freshman season for the Golden Gophers. Richard Pitino’s squad endured a lot last season, from being preseason top 15 to a Big Ten bottom feeder. Washington was the only consistent freshman off the bench, and alongside a healthy Amir Coffey, Washington will make a name for himself in the Big Ten this season.

During Luka Garza’s freshman season, he won Big Ten Freshman of the Week honors twice, and was also first on the team in blocked shots with 32. At 6-11, Garza has a solid stroke for a big man and is also not afraid to take the open shot. Garza’s foot speed on the defensive end still needs work, but look for him to take another step forward for Fran McCaffery in his sophomore year.

I think all Hoosier fans are in agreement with this one, as Romeo Langford enters Bloomington as the top ranked recruit in the state and the 5th overall player in his class.  Langford along with Juwan Morgan and De’Ron Davis will do the heavy lifting for this Hoosier team, as Archie Miller tries to get IU back to the tournament in his second year.

Bruno Fernando broke out onto the scene during his freshman season, but with the departures of Kevin Huerter, Justin Jackson and Michal Cekovsky, it is time for Fernando to really show what he can do. Alongside junior guard Anthony Cowan, Fernando is poised to have a very strong sophomore season that could possibly lead him to be drafted in the lottery.

Following the departures of Shep Garner and Tony Carr, Lamar Stevens is in the perfect position to be the star of Pat Chambers’s Nittany Lion sqaud. Stevens showed he was capable of putting the team on his back after averaging 19.2 ppg and winning the NIT’s Most Outstanding Player. Pat Chambers is in need of a NCAA Tournament breakthrough, and Stevens will be a big factor in their success.

Rounding out this list is Michigan’s junior point guard Zavier Simpson. After being the backup point guard behind Derrick Walton his freshman season, Simpson got the chance to start last season and played pretty well. With the departures of Mo Wagner, Duncan Robinson, and Muhammad-Ali Abdur-Rahkman, Simpson alongside Charles Matthews will have to carry this Wolverine team in 2018-2019.