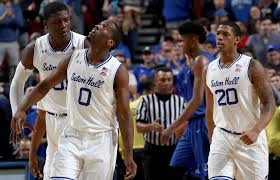 In a crazy Big East battle, 21st ranked Seton Hall was able to come away with a hard fought victory.  The prize for the Pirates?  First place in the Big East.

The first half was mostly controlled by the Bulldogs.  Seton Hall’s Myles Powell was limited with flu-like symptoms, and the Pirate bench didn’t step up.  As for the Bulldogs, Paul Jorgensen and Henry Baddley hit big shots putting Butler up by 4 at the half.

The first 12 minutes of the second half was still controlled by Butler, as Kelan Martin started to warm up, finishing with 27 to his name.  However, then Seton Hall went on a run, ending the game on a 36-22 run, in which Khadeen Carrington had 14 points himself.  The Pirates were able to finish it off from the free throw line, winning 90-87.

Some things never change, and for Seton Hall, it’s their senior class.  A deep roster headed up by Angel Delgado, Khadeen Carrington, and Desi Rodriguez normally gets help from players such as Myles Powell and Myles Cale.  However, today Powell and Cale only combined for 14 points, with no one else scoring any for the Pirates.  This meant that Delgado, Carrington, and Rodriguez had to come to play, and boy did they ever.  The trio combined for 76 points, as Carrington exploded for 29 points off of 7 threes, Delgado went for 28, 15, and 6, and Rodriguez had 19.  Even with only 5 players scoring for the Pirates, the depth of their roster showed, as 10 players all got minutes, as it looks like Coach Kevin Willard will continue to use the same rotation this season.

Next up for Butler is a date with Creighton in Omaha on January 9th at 8:30 PM (ET).  It can be found on FS1.  The Bulldogs are now 12-5, so a win would go a long ways for a team that now looks like they are on the bubble, a week after beating Villanova.

Next up for Seton Hall is a game versus Marquette in Wisconsin, also on January 9th.  Tip-off is set for 9:00 PM (ET) and can be seen on CBSSN.  The Hall is now 14-2 and in sole possession of first place in the Big East.