Florida Gators demolish Texas A&M, prove they are back on track. 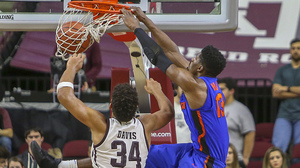 After a much anticipated matchup between the Florida Gators and Texas A&M Aggies, the Gators showed the nation that they are back on track. Florida defeated number 11 Texas A&M at College Station 83-66 led by guard Egor Koulechov who put up 19 points. After losing 4 of 5, Florida have won 4 in a row and stand at 2-0 in SEC play.

Texas A&M who were 7-0 at home this season, had the lead 9-8 with 17:29 left in the first half; they never got the lead back. Florida shot 61% from three point range and 52% from the field. The Gators forced 16 turnovers, compared to their 7. Florida usually averages 14 assists per game, but they moved the ball around exceptionally and had 25 assists throughout the game. Although the Aggies were aggressive on the boards, grabbing 13 offensive boards and 39 overall, the ball movement and sharpshooting from downtown for the Gators powered a huge conference play win and proved to doubters that they are back.