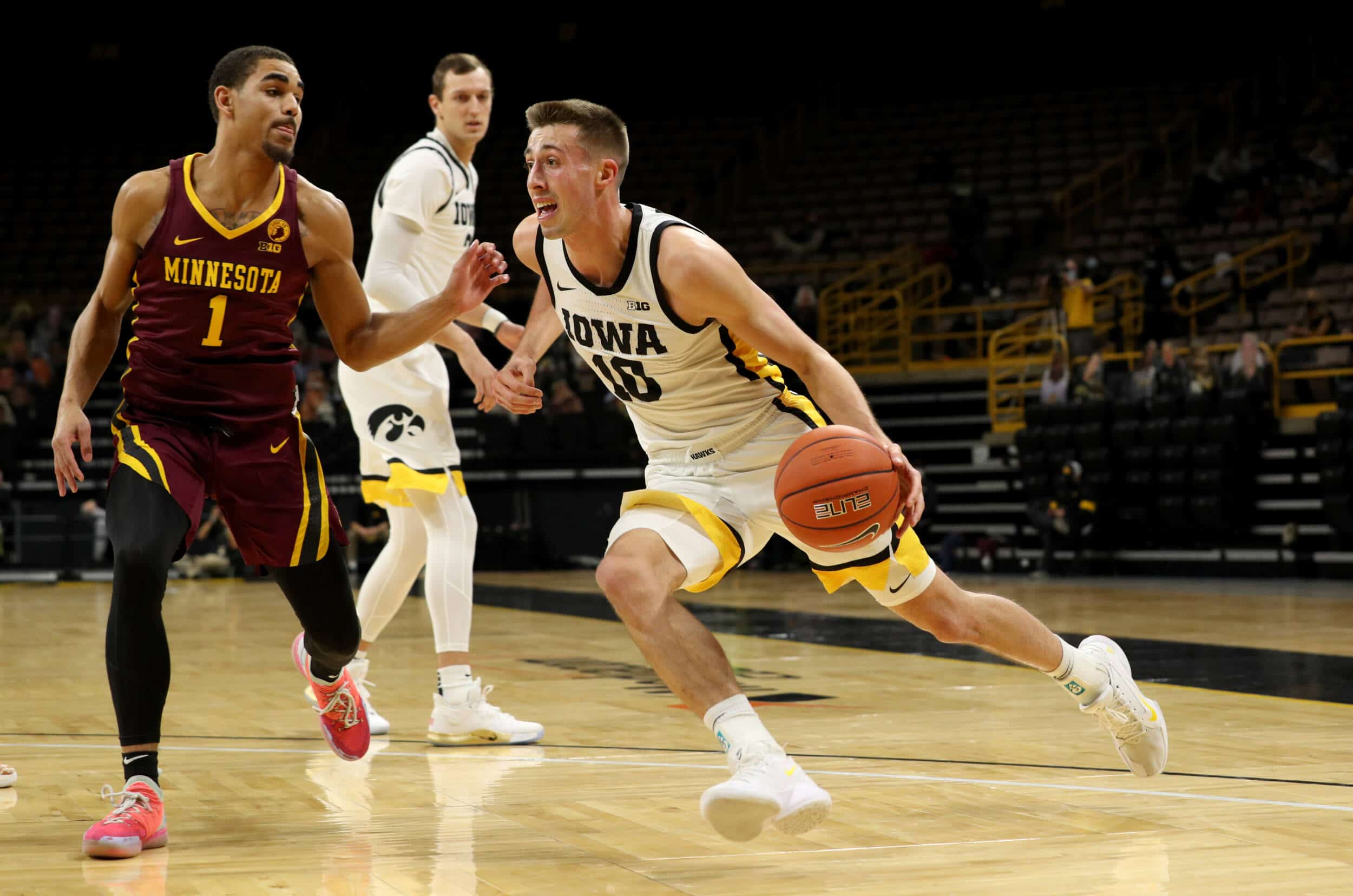 Iowa basketball got revenge on Minnesota to even up the season series.

It’s been a different year this year in college basketball. Covid-19 has changed how we do a lot of things. One thing that isn’t changing is how Iowa basketball is taking care of business in the Big Ten.

With great size, length and players that are very complementary to each other, Iowa is a team that could be standing on the podium with the NCAA Championship in their hands in March… or April… or whenever we finish this season.

They may be in second place in the Big Ten behind the Michigan Wolverines but this team is in a prime position to make a run at a national title.

1) Iowa basketball is the new Syracuse of the Big Ten playing their zone defense.

I speak these words because if you took the time to watch the game today you will notice that Iowa’s 2-3 zone sometimes looked as impenetrable as the walls of Troy. With the height of the lineup, the length of the players, and the way they seem to have each other’s backs covering drives and rebounding with ferocity…. these Hawkeyes look like a team that Jim Boeheim dreams of when he has one of his dreams he ever wants to wake from. Luka Garza and the McCaffery brothers provide height and length that any coach would love to have. Jordan Bohannon and Joe Weismann provide scoring punches that anyone would love to have. But what makes this team tough is how they work for each other. Today the Hawkeyes held the Gophers to 35 percent from the field and 29 percent from long distance. The Hawkeyes are built for the end and in college basketball, the end is all that matters.

2) Is there a better trio of players on any team than the trio of Bohannon, Garza, and Weismann?

If there is by some chance a better trio of players than these three men then that team will probably be in the Final Four with Iowa at the end because these three are undeniably tough. Luka Garza led the Hawkeyes today with 33 points, 5 rebounds, and 3 assists. Jordan Bohannon went box score bonkers today with 19 points, 14 assists, and 7 rebounds. And to top it all off, Joe Weiskamp had 20 points, 6 rebounds, and 2 assists. These three players accounted for 72 of Iowa’s 86 total points today.

3) Iowa basketball success will be based on how completely together their team plays from here on out.

Look at the team stats for today’s game vs the Gophers. The Hawkeyes field goal percentage? It was 56.4% from the field. The Hawkeyes field goal percentage from downtown Iowa City? They shot an amazing 64.3% on a very smart decision making shot selection of 9 of 14. On free throws, they nearly did what Duke’s Coach K wants his Blue Devils to do nearly every game….. and that is make more free throws than your opponent shoots. Today the Hawkeyes shot 15-21 from the free-throw line while the Gophers shot 11-16. Add in the Hawkeyes having the rebounding edge in the glass at a 41-36 clip and you have the makings of a team bound for greatness. Two other majors factors that show this team is out to win a national title? They had a beautiful 27 team assists on just 10 turnovers……. and led the 15th rank team in the country the entire game.

Every year coaches preach to their teams that it’s not the destination but the journey to get there that makes you who you are. If that’s the case, the Iowa Hawkeyes are on a journey toward greatness, and the Big Ten Championship and a national title in Indianapolis is the destination.